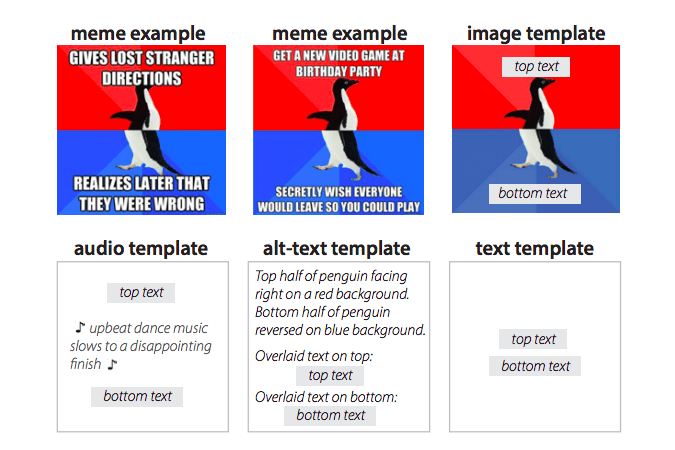 Scientists from the University of Carnegie-Melona has developed a database of memes for the blind with audio and text description. Because of this people with visual impairments can not only accept memes, but create your own.

In the world is home to around 1.3 billion people with visual impairments. They can’t fully enjoy the modern web, because websites are increasingly featured images, not text, on which designed a great piece of software for the blind.

In addition, each year a growing array of memes that are an integral part of modern online culture. In order for memes became available for the blind, runs a research group at the University of Carnegie-Melona in Pennsylvania.

Therefore, scientists have created a system Carnegie Mellon. This is the directory in which memes submitted in three formats: audio, text description and template meme. The system allows not only to understand memes, but create your own based on the template.

Algorithms of social networks are image descriptions automatically and they may be insufficiently informative. Especially when we are talking about memes. The study researchers found that blind people are much more receptive vivid descriptions that convey the tone of the meme.

The system at Carnegie Mellon combines automatic and human approaches. The algorithms recognize objects in the picture and create text description, and people ranting the meaning of the picture in the audio.

Unfortunately, the catalog may not cover the entire range of memes. Researchers call for memes authors and site administrators to do text descriptions of memes, which allows the algorithms to add them to the database and thereby make the Internet more inclusive.

The first outcome of the group from the University of Carnegie Mellon, was published in October 2019. Scientists continue to work on the catalog of memes for the blind and to improve it.