Check the vibe (Vibe Check cheki vibe to Wilczek) — a slang expression used in social networks to transmit emotional States. In a broad sense is synonymous with the phrase “how’s it going?” or Current Mood. But the meme “vibe check” is most often associated with images of violence against the person.

What is vibe check?

Check the Vibe in its original sense, is the process of transferring mental or emotional state of another person. Literally, this phrase translates as “check the vibe” or “test vibration”.

Under the vibrations are the fluctuations of human thoughts and mental streams. Some religions and esoteric teachings believe that these vibrations can be transmitted to other people. Hence the slang word vibe (vibe), which in a broad sense, translates as “mood”, “atmosphere”. The term was widespread in the subcultures Rastafarians, hippies and Ravers.

The first mention of the phrase vibe check the network dates back to April 2011. Then on the website Urban Dictionary appeared in its definition.

Vibe Check is a process by which a group or individual receive a subjective evaluation of the mental and emotional state of another person, place, or thing.

Only in 2019 vibe check the phrase became a meme. It all started with a tweet by user @umru_. On March 24 he published a post consisting of these two words.

2 APR another user has duplicated phrase, and marked the beginning of the spread of meme. He began every day to post pictures or memes, attributing to them an offer gm can I get a vibe check? (Good morning, can I get vibe check?)

gm can I get a vibe check? pic.twitter.com/KzzOC3dmER

A few months the phrase has spread on Twitter, but few people understood its importance. And only in September 2019 it was formed into a full-fledged meme.

3 Sep user Tumblr starion published micro-comic, in which one drawn man shouted vibe check and beat another man with a baseball bat.

The implication was that this man is in a foul mood that he wanted to dump your negativity on the other. It turned the banal violence.

Post began a series of memes, which depicted similar acts of violence in conjunction with the phrase vibe check. There was even a variant with the famous comic book artist Ctrl+Alt+Del, invented Loss. 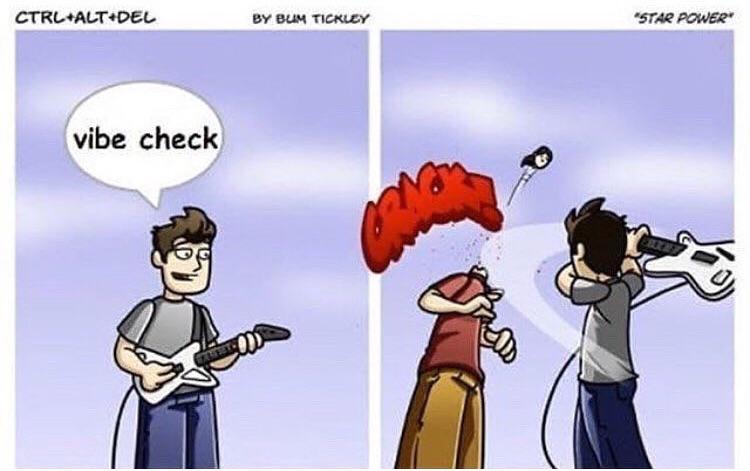 By October the phrase vibe check has become part of slang buzzer. Appeared derived constructs, such as get vibe check (to vibtec) or vibe check passed (vilcek passed). The last spread due to test on the website ShindanMaker. There could literally be tested for vibe check. As a result, was offered a strange diagram and diagnosis: vibe check passed or failed. 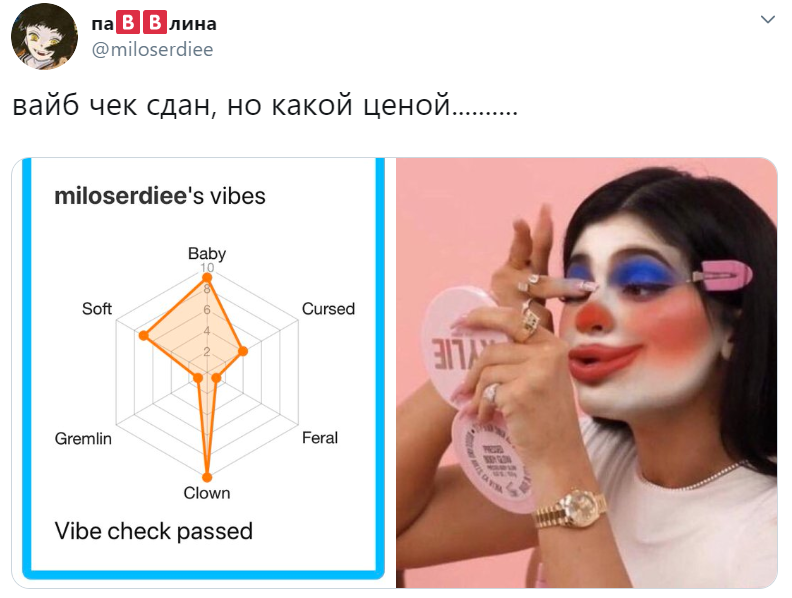 In September, the design of the vibe check was used in combination with another meme. It smile with red eyesthat stretches hand toward the screen. 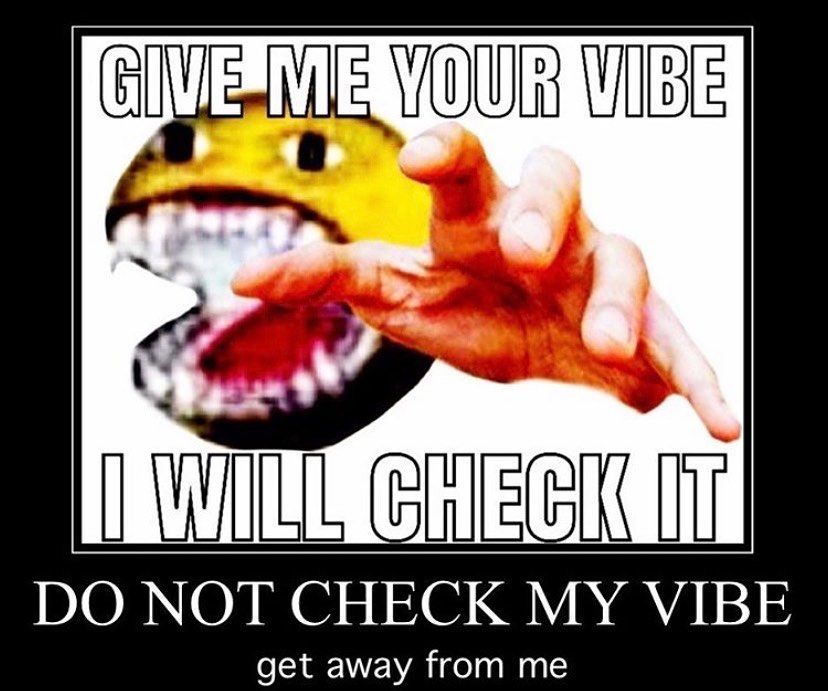 So there postirochnaja branch of memes about vibe check. Basically it was a short video game or gifs.

This genre is widespread in Runet. Some pages started to publish karpovye smiles with a hand and make them independent memes. 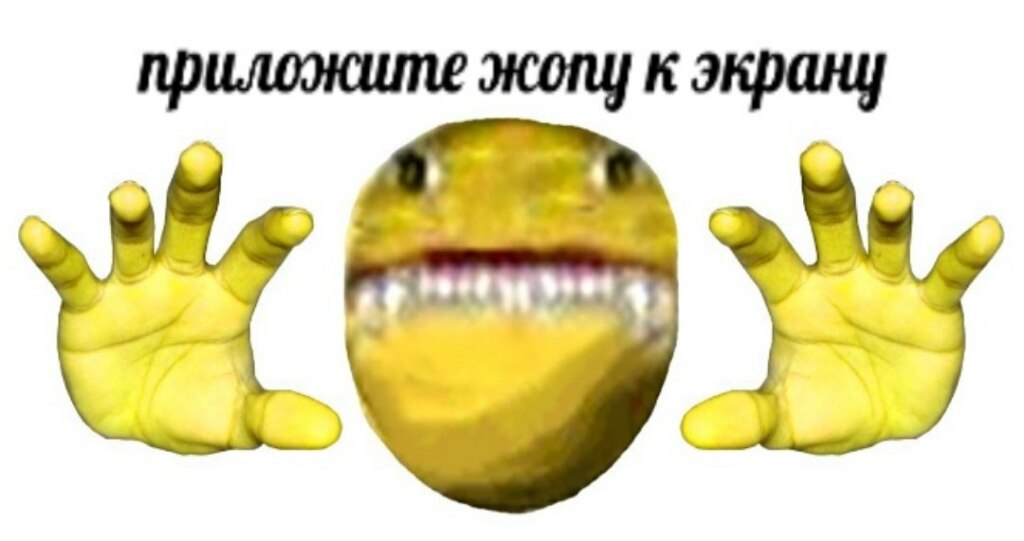 Unified and clear definition no. On the one hand, vibe check is a series of memes with the characters that are going to harm other people. Before that they scream vibe check.

On the other hand, vibe check has become part of youth Internet-slang. In social networks there are posts in which the phrase is used in many different meanings. Most writing “to make libcheck” or “set weibchen” — that is, to hit the head of someone who’s talking rubbish or spoil the mood. But also, WebCheck is a common greeting. The meme has become an alternative to constructs such as Current Mood (Current mood), GM (Good Morning, Good morning) or “Hey, hitting all the papers today”. 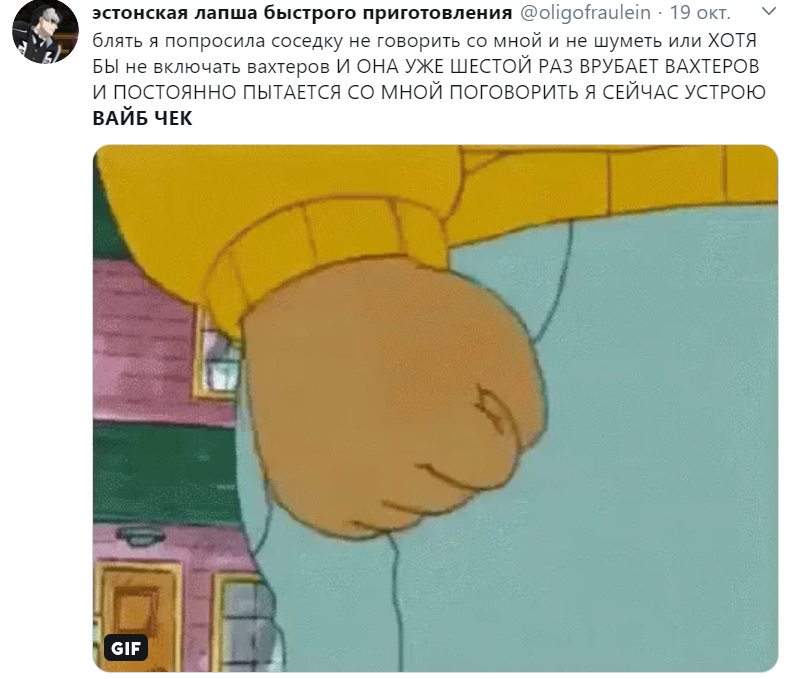 Do not forget about the etymology of meme. If the original vibe check is the exchange of emotions on a metaphysical level, in the slang phrase may be a relay current mood of the person. If it is bad — you need to do a vibe check different.