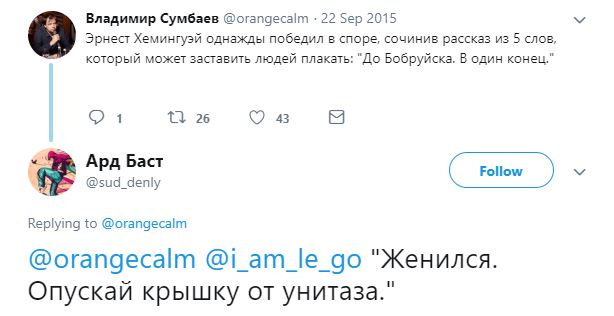 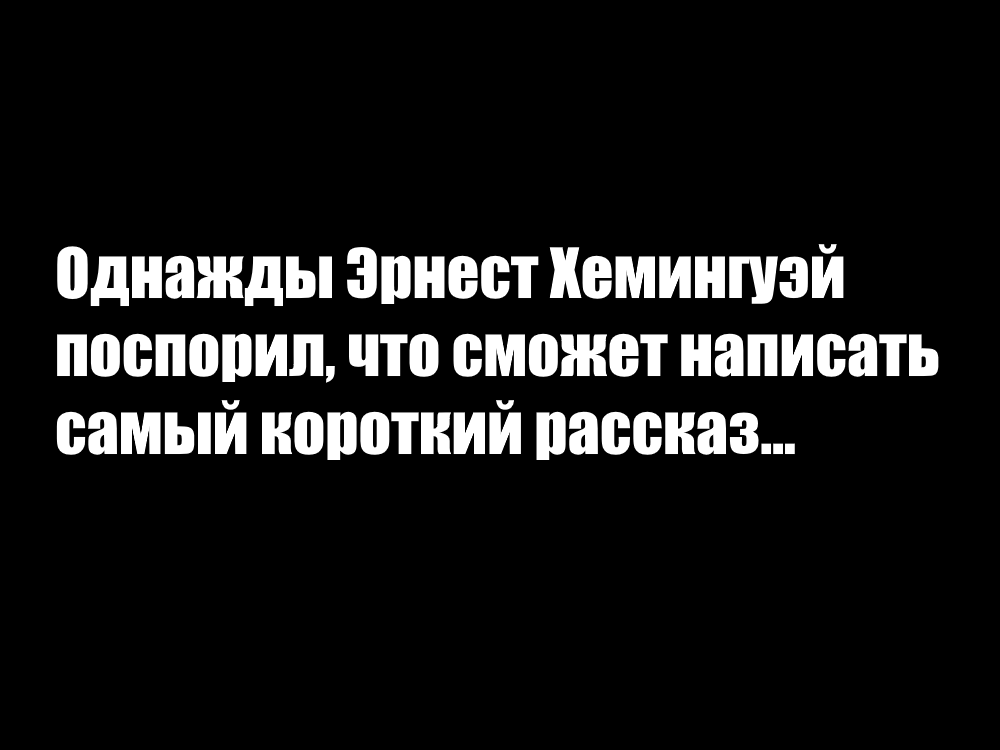 The story is able to touch any (Ernest Hemingway Once made a bet)— famous literary meme and the legend which in various forms still retell the twentieth century.

Origin story and the story itself reads as follows:

Ernest Hemingway once made a bet that I will be able to write the short story, able to touch anyone. He wrote: “For sale, baby shoes, never worn” (from the English. — “For sale: baby shoes. Unworn”), and won the argument.

Though the authorship is attributed to writer Ernest Hemingway, but official confirmation of this no, and the source of the story remains unknown.

This story supposedly happened in the 20-ies of XX century have given proof of extraordinary talent and wit of Hemingway. After this, who not only tried to capture the whole fascinating story in the format of several words.

According to rumors, the original story was written by a writer on a napkin in a restaurant Luchow’s in Manhattan. But there is another version on which this story was created at the hotel Algonquin, where the assembled representatives of the new York intellectuals (known as the “Algonquin round table”).

This is only the first of the discrepancies that surround this legend, because no one can say with certainty where or when it exactly happened.

Presumably, the story was a result of a dispute between Hemingway and several other writers. Hemingway asked each of his colleagues to place a bet in the amount of $ 10. His task was to create this “the short story is able to touch everyone.”

The only problem is that Hemingway probably is not the author of the story. In that case, if it really was he, the story (at that time) still was not something new. These stories existed long before that, and the first known of them was published in 1906 in the newspaper Terse Tales of the Town, and sounded as follows: “The Sale, Baby Carriage, Never Used” (eng. — “For a baby carriage. Unused”).

However, this complicated story with authorship only helped the story to spread and inspire many people. Those six words still found their place in history, and, in the end, doesn’t really matter who wrote them. It is important that the impact they left.

As a meme this phrase was used on Twitter in the period 2013-2015. The second and much larger wave of popularity, this phrase is in the form of a meme started worrying in mid-2018, moving from Twitter to other entertainment sites.

Original story thanks to the power of well-chosen words will make an indelible impression, because even in this short format it is capable to describe the whole story. After all, if children’s boots for sale, then this definitely is a pair, as shoes were not worn, it means that the parents lost their child.

In addition, there is where to drawn the human imagination, because in the format of 6 words each can add details to seek references, or simply to find new meaning for yourself.

That’s why people over the centuries, one way or another, returning to a similar format by publishing your short stories in Newspapers and books.

About the format not forgotten and Internet, making the original story meme. In it the phrase of the “Ernest Hemingway Once made a bet…” is published by unexpected development options short stories. This is usually something funny or absurd, for example, small quotes users from the network or catchy headlines.